Bayard Rustin was active in the struggle for human rights and economic justice for over 50 years. Born in 1912, he was reared in West Chester, Pennsylvania where he excelled as a student, athlete and musician. He attended Wilberforce University, Cheyney State College, the City College of New York, and the London School of Economics, earning tuition at odd jobs and singing professionally with Josh White’s Carolinians and Leadbelly. A Quaker, Mr. Rustin placed his religious convictions above his musical interests, and in 1941
began a long association with the Fellowship of Reconciliation (FOR). Serving as its Race Relations Secretary, he toured the country conducting Race Relations Institutes designed to facilitate communication and understanding between racial groups. He was active in A. Philip Randolph’s March on Washington Movement, and became the first field secretary of the Congress of Racial Equality (CORE). In 1942, the FOR dispatched him to California and the American Friends Service Committee to help protect the property of Japanese-Americans held in detention. In 1943, Mr. Rustin was imprisoned in Lewisburg Penitentiary as a conscientious objector. 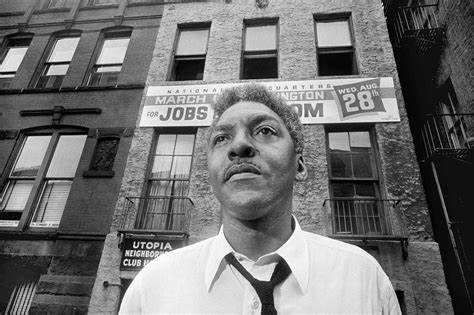 In 1947, Bayard Rustin took part in a demonstration to test enforcement of the 1946 Irene Morgan case decision outlawing discrimination in interstate travel. Known as the “Journey of Reconciliation” this protest was a model for Freedom Rides of the 1960s. Arrested in North Carolina, he served 30 days on a chain gang. His account of that experience, serialized in The New York Post, spurred an investigation, which resulted in the abolition of chain gangs in North Carolina. Mr. Rustin directed A. Philip Randolph’s Committee against Discrimination in the Armed Forces, which was instrumental in securing President Truman’s order eliminating segregation in the Armed Forces. At Mr. Randolph’s request, he was granted temporary leave from his position as Executive Secretary of the War Resisters League, to assist Dr. Martin Luther King, Jr. in the early days of the Montgomery Alabama Bus Boycott. His extensive background in the theory, strategies, and tactics of nonviolent action proved invaluable and were the foundation of this close association with Dr. King. Mr. Rustin organized the Prayer Pilgrimage for Freedom in 1957, the National Youth Marches for Integrated Schools in 1958 and 1959, and was the Deputy Director and Chief Organizer of the 1963 March on Washington for Jobs and Freedom which, at the time, was the largest demonstration in the Nation’s history. Thought by many to be the high point of the Civil Rights movement, the March on Washington created the political climate for the passage of the major civil rights legislation of the 1960s.

In 1964, Bayard Rustin helped found the A. Philip Randolph Institute, named for his mentor, the noted labor and civil rights activist. During that time the Institute had 200 local affiliates involved in voter registration drives and programs designed to strengthen relations between the black community and the labor movement. A long-time supporter of workers’ rights, Mr. Rustin participated in many strikes and was last arrested in 1984 while demonstrating in support of the clerical and technical employees of Yale University. During the mid-1960s he participated in the formation of the Recruitment and Training Program (R-T-P) which successfully upgraded and increased minority participation in construction trades.

While working to promote democracy at home, Bayard Rustin also supported human rights struggles worldwide. In 1945 he organized the FOR’s Free India Committee, which championed India’s fight for independence from Great Britain. Following the examples of Ghandi and Nehru, with whom he consulted during visits to India, he was frequently arrested for protesting Britain’s colonial rule in Africa. He consulted with Kwame Nkrumah of Ghana and Nnamde Azikewe of Nigeria. At home, he helped organize the Committee to Support South Africa Resistance which later became the American Committee on Africa. Mr. Rustin had a long involvement with refugee affairs. As a Vice Chairman of the International Rescue Committee, he traveled the world working to secure food, medical care, education, and proper resettlement for refugees. His several visits to Southeast Asia helped to bring the plight of the Vietnamese “boat people” to the attention of the American public. In 1980 he took part in the international “March for Survival” on the Thai-Cambodian border. He was Co-Chairman of the Citizens Commission on Indochinese Refugees, a non-governmental advocacy group working to assist the refugees fleeing Vietnam, Cambodia and Laos. In 1982, he helped found the National Emergency Coalition for Haitian Refugees, an organization which works to protect the rights of Haitians seeking refuge from the poverty and political chaos of their troubled homeland. As Chairman of the Executive Committee of Freedom House, an agency which monitors international freedom and human rights, Mr. Rustin observed elections in Zimbabwe, El Salvador, and Grenada. His last mission abroad, coordinated by Freedom House, was to Haiti, where he met with a broad spectrum of individuals in an attempt to determine how Americans could best help them bring democracy to their countries. In 1975, Bayard Rustin organized the Black Americans to Support Israel Committee (BASIC). He made numerous fact-finding visits to the Middle East and wrote many columns and articles on that troubled area. He worked for the freedom Soviet Jews and was an early advocate for the Ethiopian Jews in their struggle to emigrate to Israel. In 1983, Mr. Rustin and two colleagues made a fact-finding visit to South Africa. Their report, South Africa: Is Peaceful Change Possible?, led to the formation of Project South Africa, a program which seeks to broaden Americans’ support of groups within South Africa attempting to bring about democratic through peaceful means.

A collection of Mr. Rustin’ s essays, Down the Line, was published in 1971. In 1976 he delivered the Radner Lecture at Columbia University, which was published under the titled Strategies for Freedom: The Changing Patterns of Black Protest. Mr. Rustin was the recipient of numerous awards including The Murray/Greene/Meany Award, The John LaFarge Memorial Award, and The Stephen Wise Award. He received more than a dozen honorary doctorates. At the time of his death in August of 1987, Bayard Rustin was Co-Chairman of the A. Philip Randolph Institute and President of the A. Philip Randolph Educational Fund. He was Chairman of Social Democrats USA, was a member of the United States Holocaust Memorial Council, and was a life member of Actor’s Equity. He also served on numerous boards and committees.